Today we’ve been busy celebrating my daughter’s 7th birthday. Her actual birthday is on Christmas day, so we normally have a party for her friends sometime in January. This year it was a bit later than usual as her and her classmates are all doing assessments for the next schools and we wanted the party to come after all the assessments.

While they are still so young I like to invite the entire class to the party. I don’t like the thought of some children feeling left out or not being invited to parties held by their classmates so until she’s old enough to object strenuously we will be inviting everybody, both girls and boys. 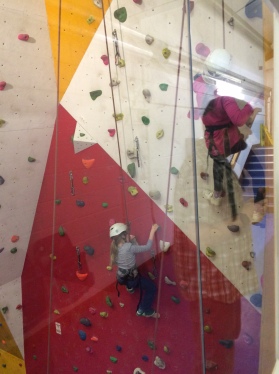 It was a climbing party at a local health centre and they could only take 16 children. As there are 18 in the class, my daughter included, I had to invite everybody and cross my fingers that at least 2 couldn’t make it. Luckily it worked out – both in terms of numbers and in terms of the activity. All the children loved it and we had no broken bones, no crying or being scared and returned a bunch of tired out children to their parents at the end of the party.

We had all the usual English party food – which is very different to the children’s party food I grew up with in Denmark – but my daughter had requested a Danish ‘cake man’ – a kagemand – which is one of a couple of very traditional Danish birthday cakes (the others are lagkage (layer cake) and kringle (a pretzel shaped sort of patisserie). I’m not sure it was that easy to see that it was a cake man, but the cake and the decorations of sweets went down very well. For instructions on how to decorate I always use this video (in Danish, but I think it is pretty self-explanatory). The cake itself is a rich yeast dough with a remonce topping made of 250 g dark sugar and 150 g butter). Here’s our finished version in any case: 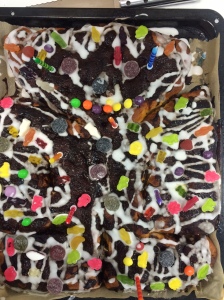